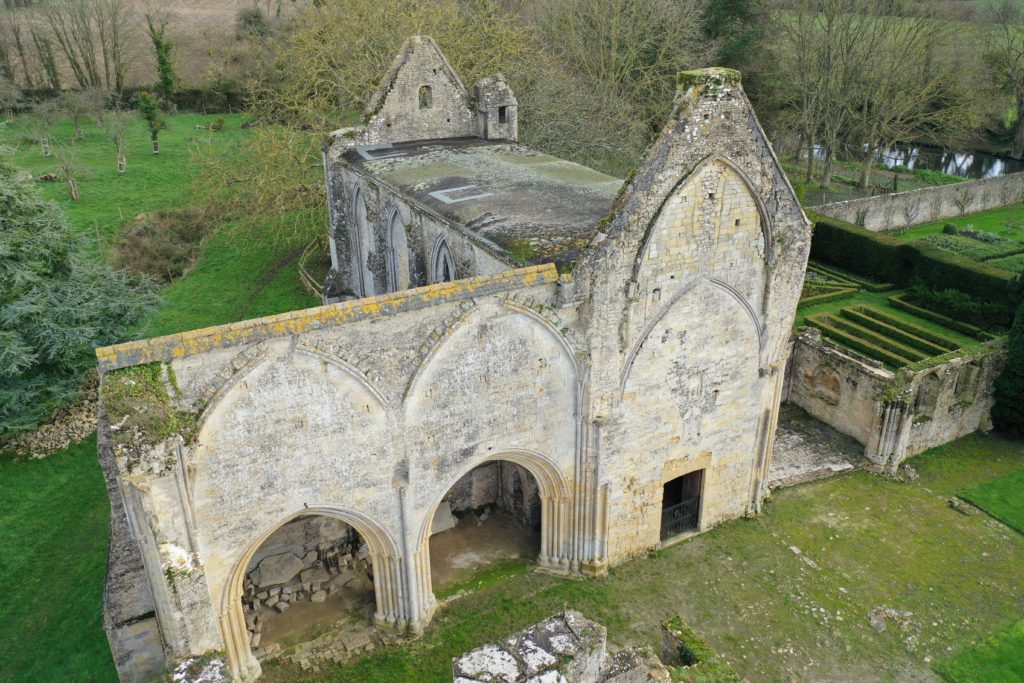 Today it is hard to imagine what the original church really looked like. That church dates to the end of the 12th century, but is no longer standing. The only remains from this early period at the abbey are the eastern wall of the lantern tower and the downstairs room of the abbot’s home.

The relics of the original church that are still visible today date to the first third of the 13th century. It was shaped like a Roman cross and had a nave with three 90 foot (27.50m) bays. The choir was divided into four bays that were each 54 feet (16m) by 19 feet (6m). At the intersection of the choir and the nave there was a lantern tower with a square base, topped with an eight-sided stone spire. One small bell hung on each side of 80 foot (24m) tall lantern tower.

There were chapels in each end of the transept: the southern chapel, named the chapel of Saint Thomas of Canterbury, and the northern chapel, referred to as the “green” chapel because of the mold that covered its walls.

The remains of the choir show how elegant the church once was. At the base of the windows there was a stone railing that marked the perimeter of the gallery. Under this there was a stone frieze carved into quatrefoils. Quatrefoils of this style can also be seen in the Bayeux Cathedral.

The high altar, which was one placed directly against the back wall, was since moved forward and leaned against the wall so as to make space for a sacristy behind it. The right wall has an arch built into it which was used as a passage to access the garden.

There was also once a lantern tower at the junction of the choir and transept, a thick wall, a triforium marking the boundary of a narrow passageway, a vault on a pointed gothic arch which gives the church its decorative moldings, pointy gothic arches, and a tympanum with small clovers sculpted into its façade.